Due to its charisma and diverse historical and cultural attractions, it is considered one of Iran highlight.

If you ever wondered about Shiraz’s Quran Gate, follow us.

Quran gate was first built by Azad ol-Dole Deylami, and a book of Quran was ordered to be placed there, for blessing purposes.

After its gradual destruction, Karimkhan Zand revived it and added another level to it plus a handwritten Quran by Sultan Ibrahim, grandson of Shahrokh Teymouri.

During Qajar era, Quran gate went through several earthquakes, and was rebuilt by Muhammad Zaki-Khan Noori. As already mentioned above, on the first day of every lunar month people used to come out of their houses and passed this gate, under its main arch, and protected themselves from any probable future harm during the rest of the month.

In 1949 Hossein Igar, also known as “Etemad al- Tejar”, a well-known merchant, restored what was ruined by the mayor of the time in 1936. The new structure was bigger than the original gate and is now embroidered with verses of Quran on both of its northern and southern faces. 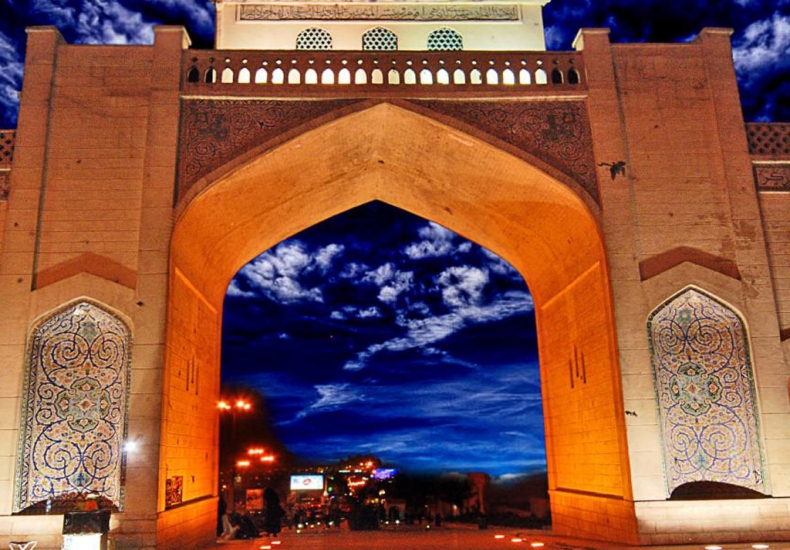 In ancient times Shiraz used to have 6 gates:

Of those 6 gates Qur’an gate is the only survivor, but people are still referring to the rest of the gates locations.

Qur’an gate was built during the reign of Azad ol-Dole Deylami. Its appellation came from the book of Qur’an, which was kept there with the order of the emir, and people and travellers would pass below the Quran in order to gain protection from harm. As a tradition people used to run this ceremony at the beginning of every lunar month, so that they would be blessed, protected and felt safe throughout the month.

The gate was gradually ruined and partially destructed, until it was rebuilt under Karim Khan Zand, and also a floor was added to this structure. During his time and by his order, a book of Quran, known as “Hefdah man”, attributed to Sultan Ibrahim’s handwriting, the grandson of Shahrokh Teymouri, was placed in a room on the top floor. This book of Quran is now safely kept in the Pars Museum of Shiraz.

Due to the imprudence of the mayor of Shiraz at that time, this structure was destructed with dynamite in 1936. Quran gate was reconstructed later by one of the famous and generous merchants of Shiraz, known as Hossein Igar in 1949.

Hossein Igar and his wife are buried in the rooms located at the sides of the structure.

In 1996 Quran gate was registered as a national historical monument.

There are various public transportation options such as buses and taxis to get to Quran Gate. But if you’re planning your trip to Iran and you’re looking to make the most out of the tourism attractions and highlights of Iran and receive useful information on the historic and cultural sites during your Iran journey, it’s recommended that you arrange interstate Iran tours and the best way to do that, is to find Iran tours that fit your criteria via Iran Negin Travel as an active Iran tour operator.

In the end we encourage you to put Iran on your bucket list, and of all the adventures, put the Quran Gate on your “things to do in Iran” list during your Iran tour and turn your trip to Iran into an memorable journey.