The term of Bazaar in ingrained with the fact that you can find anything and everything inside the Bazaar. As it has been said in one of the famous Persian proverbs, in there you are able to find “From the milk of the chicken to the life of a human”, which can be interpreted as being able to find even the most impossible things. Although it may be an exaggeration, but it can be true at some levels.

By referring to the history of Bazaar we gather that, a bazaar is an enclosed marketplace or street where goods and services are exchanged or sold. The term has originated form the Persian word “Bazar” and is sometimes referred to as “the network of merchants, bankers and craftsmen” who work in that area. The current meaning has originated in Zoroastrian, Persia, and spread from Persia into Arabia and ultimately throughout the Middle East, now it is widely used all around the world. Evidences for the existence of the Bazaars, suggest that it dates back to 3000 BCE. Due to lack of archaeological evidences, there are very little information regarding the evolution of the Bazaars, but indications suggest that Bazaars were initially developed outside the city walls and they were often associated with giving services to caravanserais.

Now that we gained a little bit of information about the history of Bazaar, it is now apropos to get to know one of the famous and traditional Bazaars of this ancient land. And give this cradle of civilization and the birthplace of Bazaars, the validation and credit it deserves.

Tabriz, the capital of Eastern Azerbaijan, has been one of the important communicational and economical centres in Iran, due to its geographical location which was on the way of trading routes from west to east and north to south.

Marco Polo has mentioned Tabriz as a city with perfect locality and as being an export destination for many merchandise goods from India, Baghdad, Mosul and Hormuz. A Bazaar that will amaze you with its vastness and people’s activities. One of the famous travellers and explorers called “Ibn Battuta”, refers to Tabriz Bazaar as one of the best Bazaars he had seen. He also mentions that, “Javaherian Bazaar” (Jewel Bazaar), was his favourite.

Tabriz Bazaar is the biggest registered enclosed Bazaar both in Asia and in the world. European merchants would arrive to Bazaar of Tabriz, after passing through various cities and Bazaars in Turkey. Approximately one fourth of Iran’s trade and commerce during Qajar era was managed by the Bazaar of Tabriz. In terms of activity rate, it was way more active back then.

Tabriz Bazaar which is an enclosed and interconnected complex, with an overall length of 1 km, is the biggest Bazaar in the world. In 1975, this Bazaar was registered as one of Iran’s National Monuments. The title of “The Longest Bazaar in Iran” is awarded to “Zanjan Bazaar” with a length of about 2 kilometres.

Due to the special characteristics and specifications of the Bazaar of Tabriz, it was registered as a UNESCO National Heritage Site in year 2000.

Tabriz Bazaar’s exact date of construction is not known, but the stories told by many world travellers about Tabriz Bazaar from 4th century until the Qajar era, give us a hint of the proximate date of its construction. Locality of Tabriz on the way of Silk Road trading route, which has also been considered as a transit road for many caravans coming from various Asian, African and European countries, has brought significant prosperity to both the city of Tabriz and its Bazaar.

About 300 years ago a massive earthquake resulted in a complete destruction of Tabriz Bazaar. In 1779, the Bazaar was reconstructed with the order of the ruler of Tabriz.

First plan of the Bazaar of Tabriz, were drawn in 1909, by “Asad ollah Khan Maraghei” as a part of the “Dar ol-Saltaneh” map (Capital of the Kingdom which was Tabriz at at that time). Parts of the north east side of the Bazaar and most of its important sections such as “Timcheh” (Plazas), Caravanserais were specified by their names on the map of Dar ol-Saltaneh.

Imagine downtown Tabriz as a quadrilateral area, Tabriz Bazaar is located at the centre of this area. Tabriz Bazaar consists of about 5500 commercial offices (Persian: Hojreh), shops and stores, 40 occupation types, 35 Serais, 25 malls (Persian: Timcheh), 30 mosques, 20 Rasteh (Rasteh: A series of shops in a same occupational group, such as Rasteh Javaherian, which means, “A series of Jewellery shops alongside of each other”), 11 corridors, 5 Bathhouses, and 12 schools.

Tabriz Bazaar includes Aali Qapoo on the east, Jame Mosque on the west and, parts of Mehran river.

Interior parts of the Bazaar

Rasteh: (Refer to the first paragraph of Architecture)

The main element of the Bazaar comprises main and secondary “Rasteh”s, stretching from city’s gates to the city, main square and Jame Mosque in the past. You will find more than 20 of these “Rasteh”s in Tabriz Bazaar.

Timchehs are divided into four groups based on their type of utilization:

3. The floor above the Timcheh, intended for non-Tabrizi merchants, who used to go there for trading.

Some of the famous Timchehs of Tabriz Bazaar are as the following:

Most famous part of this big complex is “Timcheh Mozaffariyeh” which dates to 1888, back when “Mozaffar –ol- Din – Mirza-ye- Qajari” were a prince. It was constructed by one the well-known merchants of Tabriz, “Haj Sheikh Muhammad Jafar Qazvini”.

Back then, if a new constructed structure caught the attention of the Prince, they would have to dedicate the structure to the prince. So, “Mozaffar –ol- Din – Mirza-ye- Qajari” dedicate this “Timcheh” to the Qajar prince and named it after the name of prince. The prince was very pleased, so he gave this well-known merchant very special privileges.

Timcheh Mozaffariyeh is of high importance in Iran, as it is one of the most important centres for importing and exporting of carpets in Azerbaijan (Iran’s Azerbaijan) and Iran.

Bazaars and Markets inside the Tabriz Bazaar

Bazaars and little bazaars called Markets (Persian: Bazarche), each of them selling particular and specific product or products, form the big complex of the Bazaar of Tabriz.

Built by “Mirza Muhammad Khan Amir Nezam”, the son of “Shah Suleiman”, now is one of the most prosperous bazaars in Tabriz Bazaar.

Best crystals of Tabriz were sold in this Bazaar.

3.     Bazaar Tabriz Rasteh (For the definition of Rasteh refer to the first paragraph of “Architecture”)

This is the biggest market in Tabriz Bazaar, where consumables are sold and is also known as “Bazar Melli” (Melli: National)

Famous and important places in this part of the Bazaar:

This Bazar can be regarded as the main shoe manufacturer in Tabriz.

Famous and important parts of this Bazar are:

“Yomni” is a type of shoe that used to be sold in this Bazar.

Important places of this Bazar are:

Important places of this Bazar are:

Important and famous places of this Bazar are:

If you’re looking for carpets, you can find them here. This bazar has always been a place for selling carpets.

Important and famous places of this Bazar are:

In the past, this bazar was particularly for making and selling different types of glasses. There’s no sign of that today, as most of the shops sell cosmetics and stationeries. The important and famous places of this Bazar are:

These two parts have been destructed by the municipality of Tabriz, and a park were built at the site of these two instead.

The external environment of Tabriz Bazaar

Caravanserais which we are all familiar with, form the external environment of the Bazaar.

In the past, the goods and products which were destined to go to the Bazaars, would be carried to the caravanserais by pack animals, they were unloaded there, and then porters would carry them to the serais and storehouses located inside the bazaar.

Caravanserais were decorated with pools, ponds and flowerbeds and were usually equipped also with water reservoirs and rooms built intended for residing and resting. Few of the famous Caravanserais of the Bazaar of Tabriz are:

Gradually and over time, religion blended into the bazaar, as a result religious schools, mosques and Husseiniehs (place where the martyrdom of lmam hossein is mourned for) were added to the architecture of the Bazaar. On the other hand, with regards to the important social role Bazaar played in the daily life of people, structures and buildings with social and service functions, such as restaurants, teahouses, Bathhouses, were built inside the Bazaar. Each of them have their own regulations.

Inside the Bazaar you will find 12 religious and Islamic schools. Talebiyeh, Jafariyeh, Sadegiyeh, Akbariyeh and Haj Ali Safar Ali are the famous schools of the bazaar. 30 Historical Mosques with special architectures and stalactite domes are located in Tabriz Bazaar:

For personal purposes, historical bathhouses and sudatories are located in the area of the Bazaar, which are of high importance regarding their history and architecture. Some of these bathhouses are:

In 2013 Tabriz Bazaar were chosen as one the five selected architectural designs and were awarded with “Aqa Khan architecture prize”.

Due to the high importance of this Bazaar in terms of its geographical and economical location, it has been a destination to many world travellers who had travelled through the Silk Road trading route. Ibn Battuta, Marco Polo, Jackson, and Yaqut al-Hamawi, were some of the famous world travellers who had been to the Tabriz Bazaar and have praised this bazaar for its glory and prosperity.

When and how to go to the Tabriz Bazaar

In order to see Tabriz Bazaar, you will need to travel to the city of Tabriz. Due to the fact that Tabriz is 630 km from Tehran and 150 km to Urmia, it would probably be a good idea to stay at least one night in the city of Tabriz. Tabriz is a big city and is the host to many visitors especially during spring, so make sure you make all of your hotel reservations before you leave for Tabriz or anywhere else.

Perhaps long before you depart to Tabriz, and even reserving your hotels in different cities way beforehand, either after you arrive in Tehran, or from your home country.

If you chose to make your arrangements and reservations after you arrive in Tehran, Iran Negin Travel, as an Iran tour operator, can providing you with useful information and plans best suited for your schedule, budget and your overall criteria. As we are based in Iran, we will also be of good help in finding reliable and good quality tours. Our website is accessible from anywhere in the world and will be giving you advices and recommendations via the Internet.

The most detailed address that can be given for Tabriz Bazaar is that it is located in downtown Tabriz and is easily accessible with taxis and buses. Given that this Bazaar has 4 entrances, make sure you know which part of it you are planning to see, to enter from the closest entrance to your desired Bazaar. We recommend you to spend as much time as you want inside the bazaar and have your lunch in one of the traditional restaurants of the Bazaar. 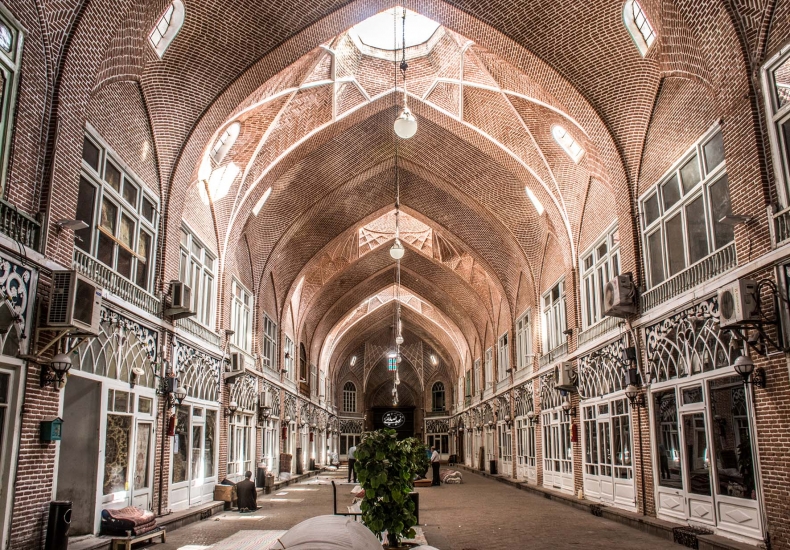 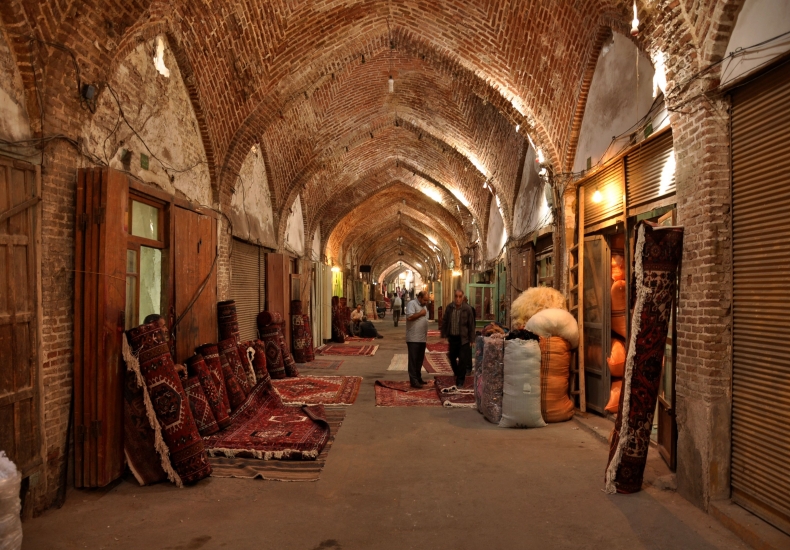