Shah Mosque also known as Sultani mosque and Abbasi Jame’ Mosque, was named Imam Mosque after the Islamic Revolution of Iran. Located at the heart of the city of Isfahan, alongside of the Naqsh-e-Jahan square. This mosque is considered one of the most important historical Mosques in Isfahan, which was built during the Safavid era under the rule of Shah Abbas the Safavid King. In terms of architecture, it is also the most important display of Persian architecture in Islamic era. This structure is the everlasting masterpiece in terms of architecture, tiling and carpentry. In 1931 Shah Mosque was registered as one of Iran’s National Monuments. And was also registered as a UNESCO World heritage site along with Naqsh-e-Jahan square.

The construction of Shah mosque which is located on the southern side of Naqsh-e-Jahan square, started in 1611 under the rule of Shah Abbas during his 24th year of reign. Other decorations and additional parts were added during his successors.

By building this mosque Shah Abbas intended to rest his ancestor’s soul, Shah Tahmasb, in peace.

Ali-Akbar Isfahani was the architect of Shah Mosque with the supervision of Muhammad-Ali Beikollah. The inscriptions were done by, famous calligraphers, Alireza Abbasi, Abdolbaghi Tabrizi, Muhammad-Reza Emami and Muhammad-Saleh Emami.

In 1598 Shah Abbas decided to move the capital of Persian Empire from, the then capital Qazvin, to Isfahan. This literally became one of the great programmes in Persian history, which was the complete remaking of the ancient city of Isfahan.

Both strategically and environmentally Isfahan was the perfect choice. In terms of environment it was a fertile land due to the presence of Zayandeh River (Zayandeh: life giving) and in the midst of an arid landscape Isfahan was an oasis of cultivation.

Strategically, Isfahan was far enough from its strongest rival, the Ottomans, thus moving the capital, would be killing two birds with one stone, Isfahan as the capital would be protected from any future assaults by the Ottomans, and Persian Empire would gain more power and influence on the important trading route for the Dutch and British, which was the Persian Gulf.

Persia had decentralized power at that time, meaning there were lots of battles for power, Shah Abbas wanted to fundamentally change the political structure and give a new personality to Isfahan. This was an important step in centralizing the power.

The ingenious setting of the square, (Persian: Meydan), was to gather the three main components of power in Persia in his back Yard:

The grand jewel of this project which was Shah Mosque had the biggest dome in the city. Sheikh Bahai also planned to religious schools and a winter mosque.

Shah Abbas wanted the mosque to be completed during his lifetime, he ignored the warnings and ordered speeding up the building process, and shortcuts were taken accordingly. Persian decorated the mosque with seven coloured tiles which was cheaper, which also helped in speeding up the construction. This was done by the master calligrapher, Reza Abbasi. Final touches were made few months after the death of the Shah.

The significance about the mosque and the square was, in order for the mosque to be visible from anywhere in the square, unlike other important structures, the axis of the square did not coincide with axis of Mecca. If they would have been built in alignment, the dome of the mosque would be concealed by the towering entrance.

Abbasi Jame Mosque located at the southern side of the famous Naqsh-e Jahan Square, neighbors the important structures of Safavid era, such as, Ali Qapu Palace and Sheikh Lotfollah Mosque and is in the range from other structures built during Safavid era. 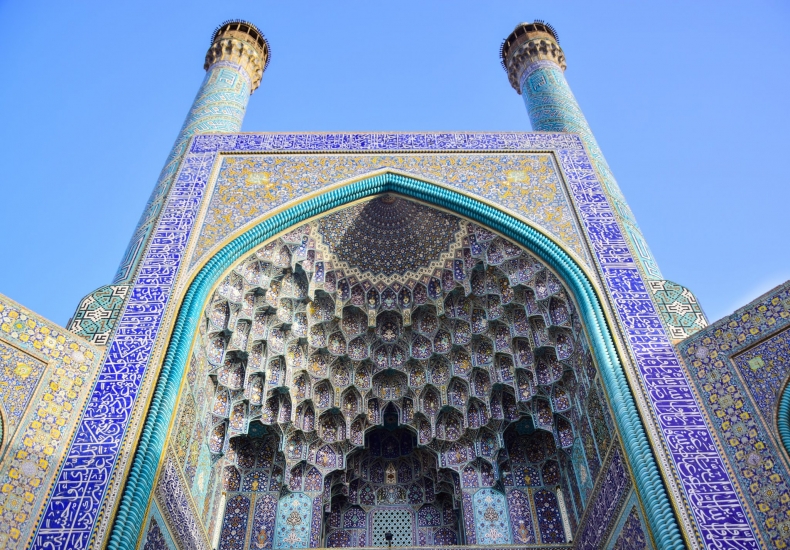 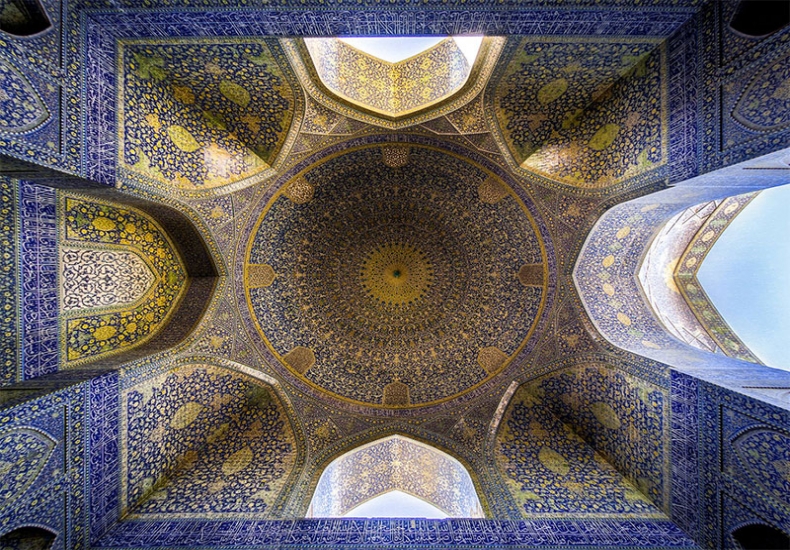