There used to be a time when the definition of a third world and first world country was not defined in any language, or at least not as much as the modern day. The time when you and I could not recall even if we lived in those eras, as it seems it was ages ago. Politics were a part but not all that the world revolved around.

I imagine the world must have been a much friendlier place, and the “What a small world!” phrase, was more tangible as the world was more like a multi-lingual society, where people would rather take their times to seek, watch, see, admire, enjoy, learn and analyse. With so limited facilities, comparing to this modern day of course, it seems to me that, detail orientation was more of a habit than a trend, where people would dedicate their times to writing books, multi-volume ones, rather than writing a blog as long as a lunch break. As time consuming as they were, each word was priceless, as it was the fruit of time and energy consuming efforts.

Iran were of course one of those countries under the curious magnifiers of many travellers and globe trotters. Isfahan as one of the capitals of Safavid dynasty, which has been known as “The half of the world”, attracted many attentions to itself from all over the world. Books have been written on this rich city, a house to many great examples of Persian-Islamic architecture.

We’re now heading to Hasht Behesht Palace, one of the greatest exemplars of Safavid residential palaces.

Isfahan the Half of the World

When Shah Abbas the Great became the ruler of Persia's Safavid dynasty in 1587, he chose Isfahan as his capital and undertook to make it eclipse all other cities. During his reign he built so many palaces, mosques, gardens, bridges that the inhabitants boasted: “Isfahan is half the world.” (Persian: “Isfahan nesfe Jahan”)

Hasht Behesht historical palace is now located in the city of Isfahan, and was built by the 8th Safavid king Suleiman, in late 17th century. This palace which was once known as “the most beautiful palace of the world”, is one of the rare examples of Persian Architecture during Safavid era.

Hasht Behesht Pavilion were registered as one of Iran’s National Monument in 1934.

Hasht Behesht Palace, was built near “BolBol Garden” (BolBol: Nightingale), in 1670 and by the 8th Safavid king, Shah Suleiman or Suleiman of Persia.

Hasht Behesht Garden, where this palace has been standing on, was part of a bigger garden called “Naqshe-e-Jahan garden”, which was built by King Ismail I (Persian: Shah Ismail I). During the reign of his successors, especially during the reign of Shah Abbas I, Naqsh-e-Jahan Garden was divided into various sections.

The construction of Hasht Behesht Palace was started during the reign of Shah Suleiman, along with complementary and improving touches to the garden itself. The Palace construction completion coincided with the 3rd year of Shah Suleiman reign in 1670 (1080 AH). According to the historians, one of the appellation of the name of Hasht Behesht Pavilion, is that this residential palace was dedicated to eight of his favourite wives. “Hasht” means 8 in Persian, in this particular case it refers to his 8 wives who resided in this palace. It declares the meaning behind one of the names it was known by, “Hasht dar Behesht”. (Hasht: eight, Dar: In, Behesht: Paradiseè The eight[Wives] in the Paradise).

This two story summerhouse, with beautiful arcs and abundant decorations, is one of the jewels of Safavid architecture.

During the Qajar era, Naser ol-Din Shah entrusted this palace to Lady “Iftikhar ol-Dole” providing no changes and modifications will be applied to neither the appearance of the structure or its boundary with Chahar-Baq street. But after her passing, many changes were done to the garden and to the mansion by her heirs.

In 1964, what remained of the garden and the mansion, were then entrusted to the ministry of Art and Culture and today this historical palace lives on under the protection of Cultural Heritage Organization.

In architecture Hasht Behesht (Eight Paradises), refers to a specific type of floor plan common in Persian architecture, whereby the plan is divided into 8 chambers surrounding the central room and each of these 8 rooms, represents eight levels of Paradise for Muslims.

This structure which is 30m(length) by and 35.25m(width), was set afoot 2 meters above the ground level on a platform, made from Tabriz marble stones and is accessible via 10 stairs from both of the entrances located on the east and west of the palace. From a big porch with two wooden columns, you will enter the central vestibule (Pesian: Sarsara) which also consists of four clerestories. This porch faces the north and has a rectangle pool in the middle.

There’s an octagonal pool with a fountain in the middle of the vestibule, and an oculus tops the crown of the arcade arch with eight wooden windows. Four wooden doors from vestibule will lead you to four octagonal rooms, which were intended for king’s favourite wives. These rooms were decorated with stuccos and paintings. The ceiling sitting on this four-clerestory building, is beautifully decorated with colourful stucco stalactites.

On the 2nd floor, a collection of porticos, arcade arch, rooms and windows adds to the beauty of this structure. This floor is also divided into four more rooms, each of them embellished with different and specific decorations. Some have ponds of water and some are equipped with fireplaces embedded in the walls. They had the habit of covering the walls with mirrors and the ceilings with beautiful tiles, surrounded with mysterious corridors and passageways.

The most significant thing about this mansion is the connection between different parts and areas of Hasht Behesh Palace, which makes it simultaneously diverse and harmonious.

As French Cavalier Jean Chardin depicts in his book, the twisted passageways and staircases in the ground floor, are so hidden and mysterious, that if one gets lost, they won’t easily find their way out.

The precinct of the palace is surrounded by beautiful cypress trees, decorated with flower gardens and a big rectangular pool.

Glorious and artistic decorations of this palace have astonished many travellers and globe trotters. Many foreign travellers have taken their time to explore Hasht Behesht Garden and Palace.

As described by French Cavalier Jean Chardin in his famous travelogue, no two spots are identical in this palace, in terms of appearance, structure and decorations.

Engelbert Kaempfer, German naturalist and physician, travelled to Isfahan in 1685 as a business man, and during his 2-year stay in Iran, he had a lot of time on his hands to study Iran and its architecture. About Hasht Behesht, he states that the details of this palace, such the ponds and pools, decorations, flower gardens, cypress trees, and passageways are so glorious, that requires a separate chapter in his book. He admires the gold plated wooden doors, and the ability of beautifully decorating the wooden doors without spoiling the texture.

Pascal Coste a French Architect, who had travelled to Iran during the reign of Fat’h Ali Shah, gathered a beautiful collection of pictures and paintings from various parts and corners of Hasht Behesht Pavilion.

After the Safavid era, especially during the Qajar period, many egregious changes were done to the structure itself and as a result, today there are no signs of the wooden fences, frames, crystal cups, and fine colourful glass appliances. As we have already mentioned earlier, by the end of the Qajar era, Hasht Behesht was privately owned and consequently lost its glorious Safavid embellishments. Gildings, paintings and mirror works were covered with plaster decorations, same as Ali-Qapu and Chehel-Sotoun.

All in all, the beauty of Safavid architecture is still evident, as famous archaeologist and Iranologist, Andre Godard says:

“Hasht Behesh with a pavilion and a chamber open from all sides has preserved the grace of the old days.”

The decorations of this octagonal palace, which reveals the architectural spirits of the late Safavid years, has been imitated and repeated many times during the history.

When and how to go to Hasht Behesht Palace

Isfahan’s mild and moderate weather, makes it a perfect destination all throughout the year. Although Isfahan is not considered a city with desert characteristics, but some might be heat sensitive and might be afraid to experience heat exhaustion during summer and the hot days. In case you fit into that group, and you prefer to walk around the city, we advise you to choose spring time as you’re travelling season, so you’ll enjoy the freshness of spring and experience Isfahan at its best.

Aside from the short and walking distance between most of Isfahan’s tourist spots, I find it more exciting to walk around a new city, as I’m able to see and notice the things I might pass by if I’m in a car or any transportation vehicle for that matter.

Isfahan is one of the main cities in Iran, so if you choose to use public transportation at some point, you can make sure this city benefits from various types of public transportation, taxis, internet taxis and buses. Subway is the only thing Isfahan doesn’t have. So you’ll have no difficulty in finding your way to Hasht Behesht Pavilion.

Same applies to accommodation. So while you’re on your trip to Iran, and while you’re spending a few days in Isfahan, you have a list of various choices, from expensive hotels, to budget friendly hotels, motels, guesthouses and even rental houses and villas.

All the mentioned services are our speciality, so you can contact Iran Negin Travel team and we'll prepare every detail you desire to enjoy during your trip to Iran.

Hasht Behesht Palace is one of the beautiful buildings in Isfahan along with Naqsh-e Jahan Square , Ali Qapu Palace, Siosepol Bridge, Chehel Sotoun Palace and etc. Thorugh our Iran tours packages you can visit every single important sights in Iran. Our Iran tours packages are made to plan your trip to Iran with unique services. We can make your trip to Iran a wonderful trip. 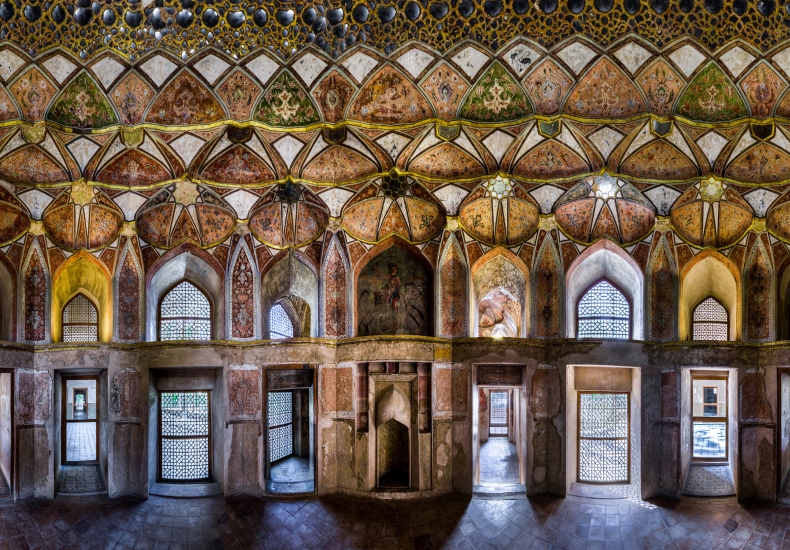 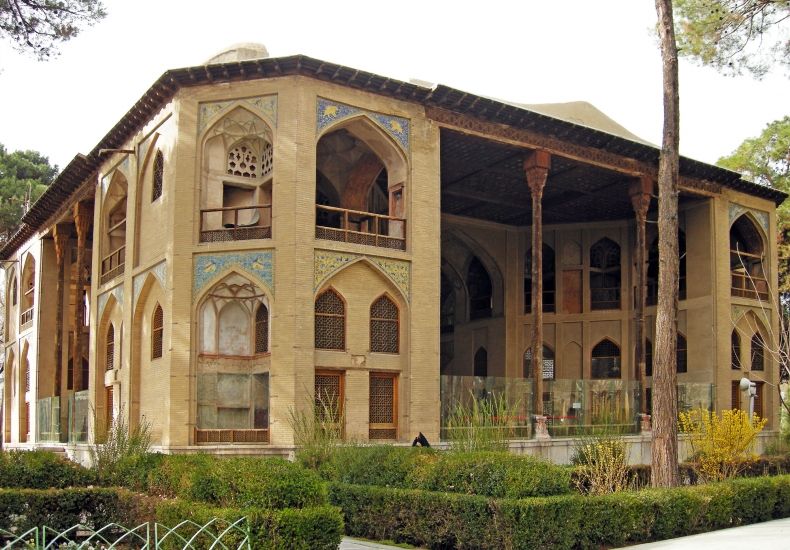